The cities of Biloxi and Gulfport have reached an agreement that will end several years of annexation litigation and will see Biloxi annexing the easternmost part of property that was in dispute.

Under the agreement, property owned by Pitcher Point Investments will become part of Biloxi, and Gulfport will end its appeal of its 2011 annexation case that a court had been dismissed.

“This Pitcher Point property was important to Biloxi because is it contiguous to another large development currently underway in the northern part of the city, a development that extends all the way to the current city limits,” said Biloxi Chief Administrative Officer David Nichols. “As a part of the agreement, Biloxi agreed to withdraw its attempt to annex the western part of the disputed area.”

And, perhaps most importantly, Nichols said, “the two cities have also agreed that neither will initiate another annexation proceeding for approximately the next three years and two months, which is the current term of office of each city’s elected officials. As a result of the agreement, only the property owners who wish to be annexed will be brought into the City of Biloxi.” 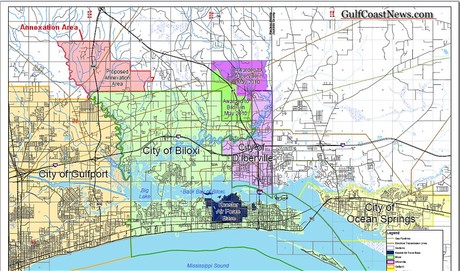